SERBIAN FB REPORTER IN FOREIGN LANGUAGES: Our mission is breaking "media blackout" from and about Serbia… You can read us in English, Russian and many other languages…
3 Comments 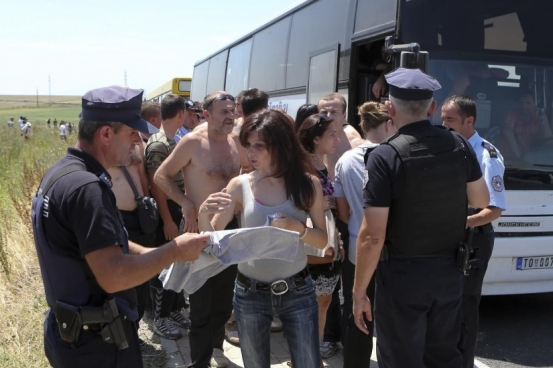 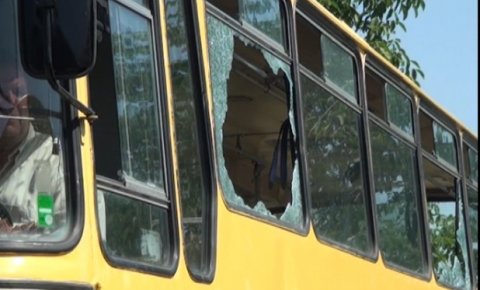 On one of the holiest Serbian national and religious, orthodox Christian holidays, which marks anniversary of 28 June 1389 “Battle of Kosovo”, scores of young Serbian children and youth, attending this event, were injured in attacks by Albanian mob and police, using firearms, Molotov cocktails, stones and other weapons. 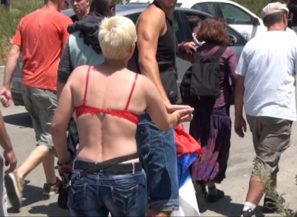 All Serbs had to pass very rigorous controls at Albanian police check points. The Albanian Police was supervised by the occupying NATO (KFOR) force and Eulex police. It was made sure that the Serbs were unarmed!

After violence broke out, one Serbian child and another young man are in critical condition. Seven others are in serious condition and hospitalized in medical Clinics in Gracanica, Prokuplje and Nis. At least 36 others are injured, mostly by gunfire. Some of the not seriously injured have been released from hospital.

The most disturbing incident took place in Kosovo´s capital Prishtina. Two buses with young Serbian students, age 8 to 16 were attacked by an Albanian mob. Four Molotov cocktails and concrete blocks where thrown at the buses, breaking the windows in an attempt to set the terrified Serbian children and youths on fire. This incident took place near hotel “Viktori” in Prishtina.

The director of the medical clinic in Gracanica, Mrs. Rada Trajkovic, issued statement that: during this incident 16 pupils were injured, one is in critical condition; two boys have head injuries from concrete blocks that were thrown through the bus windows…

The head of the Serbian Christian Church in Kosovo, Bishop Teodosije, condemned this, and number of other savage Albanian (Muslims) attacks on the Serbian Christian minority, that took place in Kosovo today, under the idle watch of the so-called “stabilizing” KFOR force, and the European “mission of law”- Eulex police.

PHYSICAL ABUSE AND “SEXUAL HARASSMENT” IN FRONT OF “INTERNATIONAL PEACEKEEPERS”!

Earlier today, in Gazimestan  and Grachanica Serbs went to take part in the Vidovdan celebration! Thousands of Serbian nationals had to pass through recently established “Albanian police and customs” check points between Serbia and the Kosovo, which is illegal under the the provisions of international law and the Charter of the United Nations. The attendees were subject to harassment and physical abuse by Albanian “police”. Women and men were forced to take off all clothing with Serbian religious and national symbols, even T-shirts (ending literally “half naked”), – some people were beaten, some returned back to central Serbia.

The International “protection force” did nothing to prevent this abuse by their “Albanian partners”!? You can imagine the shame and humility, especially in Serbian women, being forced to attend this high-profile religious event, stripped of their clothing…

ALBANIAN POLICE WAS SHOOTING “TO KILL” UNARMED SERBS- WHY NOT, THE SAME DID THEIR KFOR “MASTERS” IN TWO OCCASIONS THIS YEAR!?

The most serious incident took place in the morning at “the border crossing” Merdare, when Albanian “police” opened fire with live ammunition at unarmed young Serbs from three buses. The youth were shot at when they left the buses after they were realizing  that Albanian Police had led them into a trap that was set up by an Albanian mob.

According to the witnesses, the “police” vehicles were escorting them in the circles around the city of Podujevo, trying to alert and attract the Albanian mob, and provide them with opportunity to attack Serbian youth in the buses. 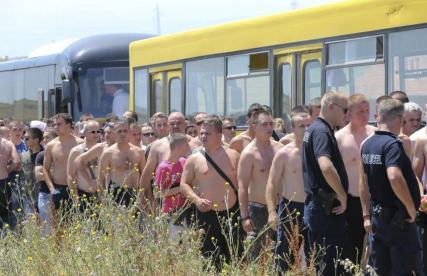 The hospital director in the Serbian city of Prokuplje, Mrs. Ljiljana Arsenijevic issued a press statement, describing the injuries of these young people, shot by so-called “police”.  Most of today´s Kosovo’ “police” are made of former KLA “fighters”- The KLA was  until 1999 designated as a terrorist organization with ties to Al Qaeda by the US department of State.

“One young man in critical, life threatening condition has been transferred to the trauma center, in Nis’ main hospital. At least 20 had to be treated for gunshot wounds.

The police minister of Kosovo, Bairam Rexhepi issued very  a cynical statement, in regard to the above “incident”, to the Radio station “Free Europe”, stating that live rounds (that wounded scores of Serbs inside Kosovo) were fired from Serbia?

According to the Serbian police spokesperson Dragan Stamenkovic from Prokuplje, the ethnically mixed police station in the mainly ethnically Albanian village Dobrosin in Serbia was attacked with heavy machine-gun fie. 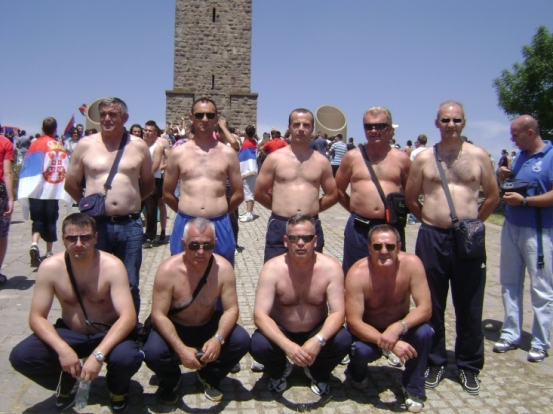 This village is located close to the border between Serbia and Kosovo, and gun fire came from inside Kosovo. The village of Dobrosin is populated by hard-core Albanian separatists, and is known as a birth place of the Albanian National Army, ANA, which is designated as a terrorist organization by the current US administration.

During the terrorist attack, which is one of many over the recent months, the police officer Branislav Markovic from Bujanovac, sustained non-life threatening injuries, caused by a high-caliber bullet. The incident has been investigated by the police forensic experts, as well as by the “investigating judge” Mrs. Nada Covic, from the Regional Court in Vranje.

The most recent Albanian terrorist attack on this police post took place on May 17th, this year… 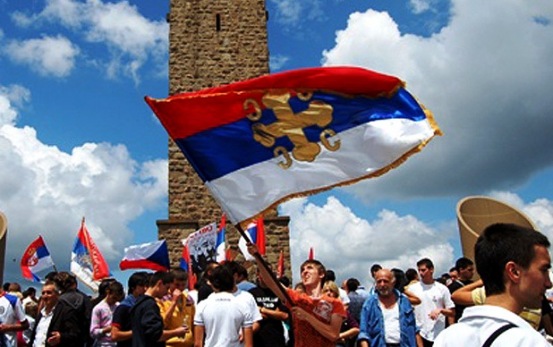 Blogger M. Novakovic is the member of IFJ (International Federation of Journalists), Founder of the internet based "FBR Media Group", and Editor @ PoliticallyIncorrect.News. Email contact: editor@politicallyincorrect.news